Mission: As the nation's university, it promotes equal access to the Colombian education system, provides the widest range of academic programs, and trains competent and socially responsible professionals. It contributes to the elaboration and resignification of the nation's project, studies and enriches the cultural, natural and environmental heritage of the country. As such, it advises on scientific, technological, cultural and artistic matters with academic and research autonomy.

Vision: The National University of Colombia, in accordance with its mission, defined in the Extraordinary Decree 1210 of 1993, must strengthen its national character through the articulation of national and regional projects, which promote progress in the social, scientific, technological, artistic and philosophical fields of the country. In this perspective, it is the University, in its capacity as a higher and public education entity, which will allow all Colombians who are admitted to it to carry out undergraduate and graduate studies of the highest quality, under criteria of equity, recognizing the various orientations of an academic and ideological nature, and supported by the University Welfare system which is transversal to its mission axes of teaching, research and extension. It will continue to be the best University in the country, and will have to establish itself as one of the most important in Latin America and the Caribbean, with high quality undergraduate and graduate programs, equipped with infrastructure and modern and flexible teaching techniques that facilitate a rapid response of the academic community to the changes and new challenges of its environment and insertion in the global world. The National University will also influence the development of quality basic, secondary and technological education and will lead, through its teaching and research practices, the country's Public Higher Education System. The University will offer postgraduate courses based on the generation of knowledge and its use to solve the fundamental problems of Colombian society; likewise, it will carry out research and extension of the frontier and relevant, with close communication between the University and the productive, social and governmental sectors of the country. There will be a special emphasis on the development of research from multiple organizational forms (groups, centers, transdisciplinary and thematic focuses, inter and transdisciplinary institutes) coordinated in a system with clear goals, with promotion policies and effective communication instruments, as well as with programs integrated to groups and networks in the national and international fields. Research projects will be largely common to both undergraduate and postgraduate programmes, and will have expedited flow channels between them. The undergraduate and graduate programs will be linked and should interact with research and extension programs through the research professors themselves, participation in the seedbeds and research groups, the realization of permanent seminars of socialization and social validation of research and extension results, among others, disseminating the products of research in textbooks and national and international journals, and even through the mass media. Likewise, the University will strengthen extension or integration programs with society and its institutions, which will respond to fundamental social needs through university initiative projects, and will be strongly related to research and teaching. It will use the knowledge generated to produce - through its graduates and the impacts of research and extension - well-being, growth and economic and social development with equity. The University will then have an active institutional life, supported by a university welfare system that aims for a healthy university, with a communication model and a management structure that allows effective decision-making, with real participation of the university community. It will be a University that thinks permanently and reflects on the structural problems of the country. This will allow it to be a matrix institution of conservation and change by efficiently using the extraordinary diversity of systematic knowledge it houses; a diversity that is expressed both in the number of its disciplines and in the multiplicity of its philosophical and ideological approaches and positions. By following this path, it will be able to effectively lead Colombian thought, intellectuality and artistic creation: it will train the leaders in the field of science and technology that the country needs to make its progress sustainable, and it will provide the citizens who make their academic transit through the University with the conditions for the intellectual and integral development to which they are entitled as human beings and citizens of this country, allowing them to project themselves into the globalized world. In short, the Institution will be an academy that participates actively, critically and constructively in the reflection on development and national identity, promoting languages to communicate with the rest of society 1. 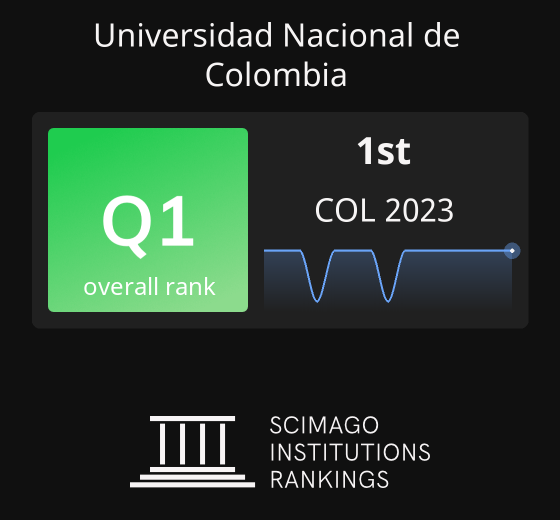