Mission: National, non-university science and research institutions fulfil an important role in the most developed countries of the EU and the world. SAS, along with the academies of other central-European countries, has historically played an important leadership role in the research organisations of the country. The first mission of SAS is to carry out top-level basic research at the frontiers of knowledge that leads to new discoveries and concepts. The second mission of SAS is to make the scientific infrastructure for technically demanding research available to all interested parties, be it universities or other organisations of research and development. The third mission is long-term strategic and applied research and development, whereby SAS intensively and effectively co-operates with the business sector, the public sector, and civil society to transfer knowledge into practice. A modern SAS must carry out all three of these missions. Exploratory frontier research must adhere to the highest international standards. SAS is developing a system for evaluating the quality of frontier research, and this system is applicable at a nationwide level. To ensure that an open science infrastructure develops, SAS is beginning work on a roadmap of the national research infrastructure, as well as on strategic plans for building a large infrastructure of European significance. One prerequisite of long-term strategic research in co-operation with the private sector is the transformation of SAS organisations into a public research institutions, which will allow the pooling of resources and personnel, the exploitation of intellectual property, patents, and licences, and the establishment of spin-offs and start-ups.

Vision: The fulfilment of the abovementioned goals and development strategies will strengthen the position of the SAS as an excellent national non-university public research institution which undertakes top-level research in selected areas of the natural, technical, medical and social sciences as well as in the humanities, for which it will have the optimal conditions and resources. This will see the SAS form a stable and promising foundation for the economic and cultural development of Slovakia with its effective integration into the European Research Area. At the same time, the SAS will be an institution which is open to new civilizational challenges and new issues in science and research, which it will be able to react to with flexibility, creativity and innovation through the results of its research and its contributions to balanced and broad social development. 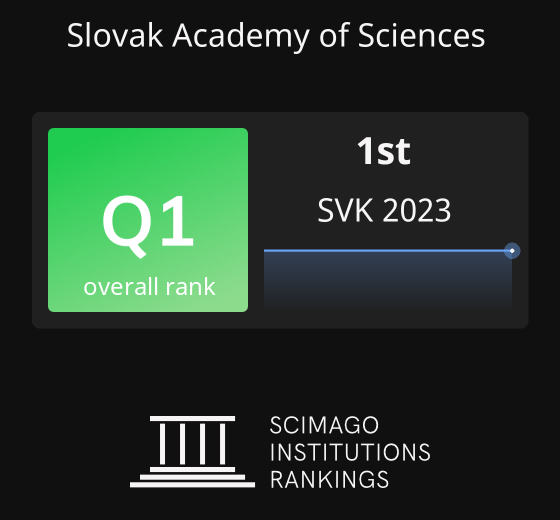