Mission: The mission of Hazara University is to impart knowledge in the fields of emerging and social sciences as well as liberal arts inculcating the universal values of truth, beauty and goodness among the younger generations, on the one hand, and to provide a befitting research base for contributing original research to the world research pool for the service of mankind, on the other. It further aims at imbuing the students with higher and nobler ideals of Islam and socializing them into well-rounded persons ever ready to serve their own nation, the Ummah and humanity at large. The Emblem of the University has the motto derived from the Holy Quran, an injunction from Almighty Allah meaning “Get Knowledge”. The Emblem has snow-covered mountains of Kaghan in the backdrop and the Siran River in the foreground, having Deodar trees on its bank. Deodar tree has the symbolic significance of slow, steady and sure growth spreading over centuries. The mission of the University, therefore, is to impart education systematically, gradually but surely spreading over centuries. The objective of the University, therefore, is to impart universal education systematically and gradually but surely to the coming generations of students for over indefinitely remote and distant future with Godspeed. "The emblem of the University was approved in its present design by its faculty, 'Ullema' and the Syndicate in 2003.

Vision: Hazara University intends to be a standard university providing affordable quality educational opportunities for students to develop scientific, socio-culture, economic and political leadership, through learner-centred teaching and research, while strengthening their identity at Regional, National and International level. 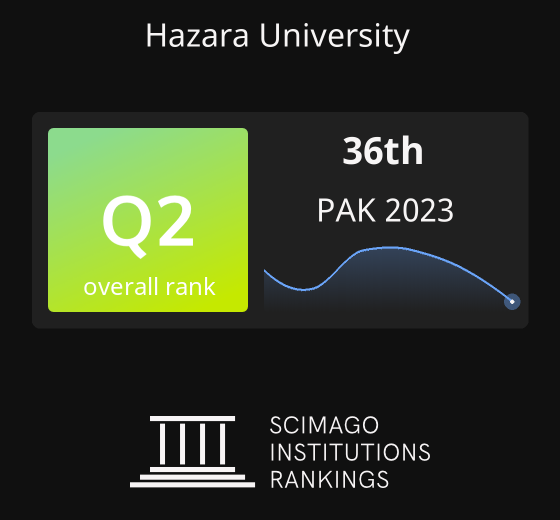