Mission: The making of physicochemical biology in our country is closely related to development of the Institute of bioorganic chemistry. The 50th became the beginning of booming progress of biopolymers chemistry and wide-spread penetration of exact sciences ideas and methods into biology. It provided constantly growing requirements of industry and public health for results of fundamental researches, it laid down the foundations of modern biotechnology. The founders of the Institute associate of the USSR Academy of Sciences Michail M. Shemyakin and group of colleagues keenly caught these tendencies in the world science. From the very beginning of the Institutes activity strategic aim of researches was analysis of fundamental (up to molecular level!) interconnections spatial structure → dynamics → functions of biomolecule, from low-molecular weight compounds to complex supramolecular cellular systems. The distinction of the Institute always was a concentration of power on solving of the most actual and hard biological problems, for solving them gurus and talented youth are inviting in the Institute. An effective solution of such problems required not only making original sci-methodologies, but innovatory scientific organizational steps. When were made the Branch in Puschino, formed the mail scientific production units: complex pilot plant, genetic engineering and isotope blocks, the Laboratory of Biological Testing, station Biotron, etc. Special attention was usually paid to a scientific and technical cooperation as with academic organization (for ex. in USSR there was network of institutes of bioorganic chemistry from Vladivostok to Minsk) as departmental RDEs and foreign institutes. This collaboration was mutually beneficial and very effective; it made reaching of high level of differentiation of labour and bringing researches in some scientific areas up to world level. The concentration in the Institute of different really modern laboratories with various purposes and powerful scientific production infrastructure made creation of unique in Russia center of fundamental and applied research works in physicochemical biology and biotechnology. A huge power of the Institute allows various active preconceptual scientific works and rapid concentration of different units energies in case discovering new interesting objects or phenomena. A striking example is a beginning in 80th works in membrane proteins initiated by Yuri Anatolievich Ovchinnikov nowadays this sector is one of the most hot of post-genome researches. A one more important consequence of the advanced organization of the Institute is a bright trend to researching on junction of sciences nowadays this provides the most interesting scientific discoveries. In spite of difficult years for science in 90th in Russia, the Institute saved basic potential and original scientific charisma, built during 50 years on the front line of world biology. A huge scientific backlog, a unique and effective scientific and production infrastructure promoted that, furthered adaptation of staff to grant system of financing and development of biotechnology market. And now IBCh RAS is a leader of fundamental and innovation-oriented scientific works over the range of molecular, structural and cellular biology, bioorganic chemistry, biophysics, bioengineering, etc. 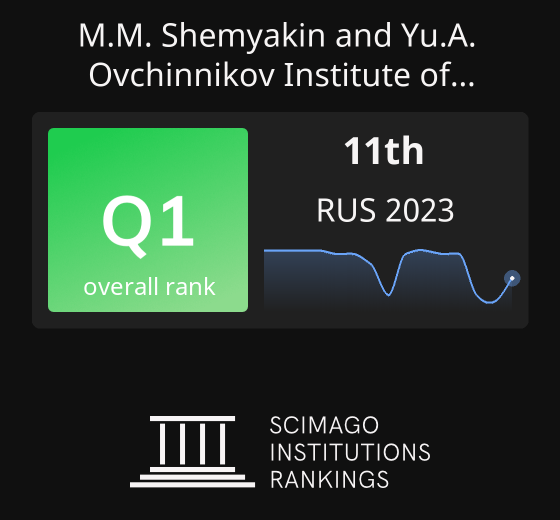