Mission: Kazimierz Wielki University is a public higher education institution with a legacy of tradition in educating teachers at the former teacher training school, developing dynamically and regularly expanding its academic potential and educational scope. Today’s University reflects the aim of residents of the city of Bydgoszcz to establish a university in our city dating from the end of the 19th century, and wishes to operate in accordance with the best traditions of European universities. As a community of academic staff, students, graduates and administration personnel, the University aims to pursue truth, justice and development in serving the city, the region and the country. Truth, Justice and Development of the city are to express and to serve Wisdom which is the top principle of our pursuits. Kazimierz Wielki University, helping to keep alive the best traditions and building on its legacy, launches comprehensive actions for science and education meeting the needs and aspirations of the people and the objectives of the state. The University combines research and education of specialists for the labour market with educating social leaders offered by today’s faculties in the form of bachelor, bachelor in engineering, master and doctoral courses. Participating in the global sharing of thoughts and values, the University develops research and educates for the future in pursuit of freedom of science and credibility of knowledge as well as human dignity and social justice. As a centre of intellectual reflection over the evolving reality and as a centre creating culture, the University participates in the development of the city and the region especially, providing knowledge of facts, values and methods of solving the key problems of social and economic life and actions to enhance the quality of life.

Vision: The Kazimierz Wielki University community, following its objectives and responsibilities, does not forget its own development which is subordinate to the vision of a multi-profile, autonomous university taking part in the global science of a strong academic position and social prestige in the country. We pursue a university as a centre of a free exchange of thought, comprehensive research in the evolving world and a centre of open and permanent education and development of the entire community in conditions which will serve the dignity of and be friendly to all. Our community wishes to act and to implement all the objectives based on a consensus respecting a variety of views and principles of democracy of universities as well as following the aspirations of the academic communities of our city and the objectives of the region and the state. 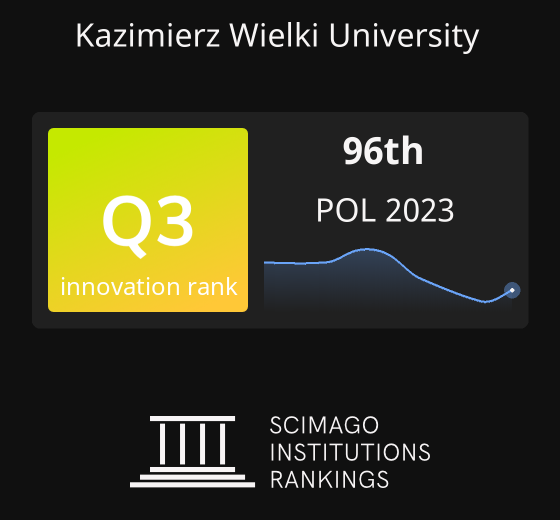