Mission: The UCLM is an institution which, within the scope of its the provision of public service in higher education through the teaching and study, research, knowledge transfer to society and university extension, with autonomy from any economic power, social, ideological or political. This definition, given by the University's own Statutes in its first The article is similar to the one in the statutes of other public universities for as it summarizes the content of the first two articles in the title Preliminary of the Organic Law 6/2001 of 21 December on Universities (LOU), dedicated to the functions and autonomy of universities. Some characteristic elements of the aforementioned articles 1 and 2 of the LOU are given by (1) the consideration of higher education as a public service which is entrusted to the university institution; (2) the assertion that the research and study are linked to teaching as part of the aforementioned service (3) the recognition that universities not only are responsible for the transmission of knowledge, whatever its nature (scientific, technical, artistic or cultural) or its purpose (assessment, transfer or dissemination), but also of its creation, development and criticism; and (4) the principle that The task entrusted to the universities can only be carried out and satisfied the constitutional autonomy of the university in the block of fundamental rights, composed of academic autonomy and financial. The public service mark of higher education and independence with respect to any outside power have again been reaffirmed with the important legislative update in administrative matters contained in the Law 39/2015, of October 1, on the Common Administrative Procedure of Public Administrations and Law 40/2015, of October 1, on the Legal Regime of Public Sector, which now consider public universities to be in the The following are not considered to be public administration nor of a dependent or related entity to any of them, being furthermore applicable the administrative legislation merely supplementary to that which constitutes its own legislation. Beyond this common legislative framework for the various universities in In Spain, each university defines its strategic mission according to signs of identity that have a foundational origin, are transmitted by custom and are strongly determined by the model of university system defined for a a certain territorial area. In the case of the UCLM, such signs of identity come given its independent character, research base, international projection and entrepreneurial vocation. These signs of identity have been maintained as elements shared by the university community and Castilian-La Mancha society throughout of different generations, governing mandates and social stages, and therefore constitute distinctive features about defining the strategic mission of the UCLM in the following terms: The UCLM is an independent research-based institution that provides the public service of higher education with international projection and vocation entrepreneur in the service of society, through teaching, research, the transfer of knowledge and innovation, and the dissemination of culture and university extension. The formal definition of the strategic mission therefore includes the functions attributed to any university under the basic legislation, along with the The distinctive features that delimit the institutional identity of the UCLM in this case are its character, basis, projection and vocation.

Vision: The vision is a manifestation of what the institution wants to become in the years through one or more planning cycles and one or more strategies. As indicated in the first section, the strategic vision of the previous cycle The planning for 2012-2015 was to achieve a sustainable and modern university, with many of the expected results being achieved. Without neglecting the maintenance of these two achievements of the UCLM Strategy 2015, in particular by providing special attention to those aspects that are pending or in the process of achievement, the strategic vision for the present planning cycle 2016-2020 in accordance with the UCLM 2020 Strategy, it is a more competitive UCLM in the panorama of growing rivalry between universities, which is also capable of contribute more intensively to the level of development and wealth creation in their field of implantation. The vision of a more competitive university is based on achieving related to the recognition and positioning in international rankings in the year 2020, while the vision of a more developmentally decisive university is The project has been implemented through achievements linked to the increase in the multiplier effect of the activity and to the creation of spaces on which to articulate strategic alliances associated with innovative strategic sectors. Competitiveness has become an extremely important challenge in The company's success is due to the growing rivalry for all kinds of the ones that make use of the universities. Unlike other public educational services or health, where competition is basically local and regional, education The university has become an area of national and international competition, more and more, also international. In Spain there are more than 75 universities and in the There are over 4,000 in the world. The rankings that make external evaluations independent of the various universities contribute to transparency in terms of to the relative quality levels they achieve in comparative and competitive. According to these considerations, the vision of competitiveness passes because UCLM will be recognized in the main international rankings and will occupy a outstanding position in them in 2020. The realization of the first aspiration would come from UCLM being included in the four most prestigious rankings in the world, such as ARWU, THE, QS and USNEWS. The realization of the The second aspiration would mean that UCLM would be placed among the top 15 Spanish universities and the world's top 500 in the various facets of training, research, innovation, employment or internationalization, among others, according to these same rankings. On the other hand, development means increasing the impact that the university has on the growth of Castilla-La Mancha, contributing to the change towards a productive model of greater added value according to which the business fabric makes a more intensive use of the knowledge emanating from the university. The challenge of development is not only an aspiration of the university towards society, but also a need for it to continue to move forward, as the synergies arising from to implement actions in accordance with what has been called the triangle of knowledge, formed by research, innovation and education, provide enormous joint benefits for the various actors involved, including university institutions. In its more than 30 years of history, UCLM has been able to impact with a multiplier effect of 3 on the regional economy and successfully develop a triple helix with a reference company in software development. The realization of the first developmental aspiration would be to increase the effect university multiplier on the regional economy up to a factor of 4, so at least 4 euros of regional wealth is generated for every euro invested in the UCLM. The The realization of the second aspiration would materialize in the creation and implementation of at least one other triple helix space in the UCLM area, thus contributing to the development of an innovative business and institutional fabric in strategic sectors for the economy. Based on these considerations, UCLM's vision for the coming years is defined as follows: UCLM aims to strengthen its competitiveness in the university and to strengthen its contribution to development in its field of activity, ensuring it its recognition and positioning in the main university rankings and increasing the impact on the economy and the contribution to innovation to through their activities. The progress of the university in the two challenges that make up its vision has a mutually beneficial effect; a more competitive university will contribute more facility to the growth based on the knowledge and a productive fabric more developed will enhance the competitiveness of the university. 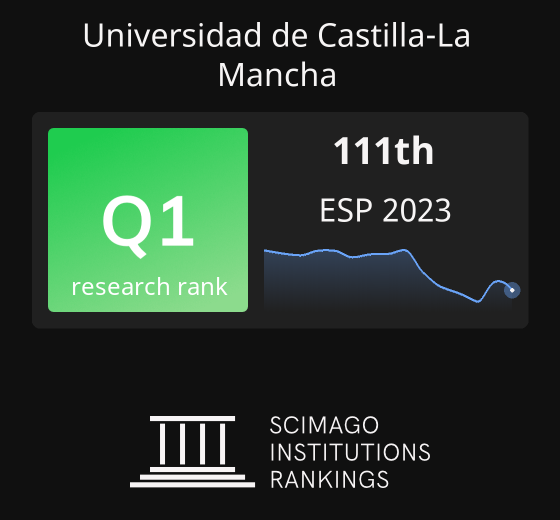